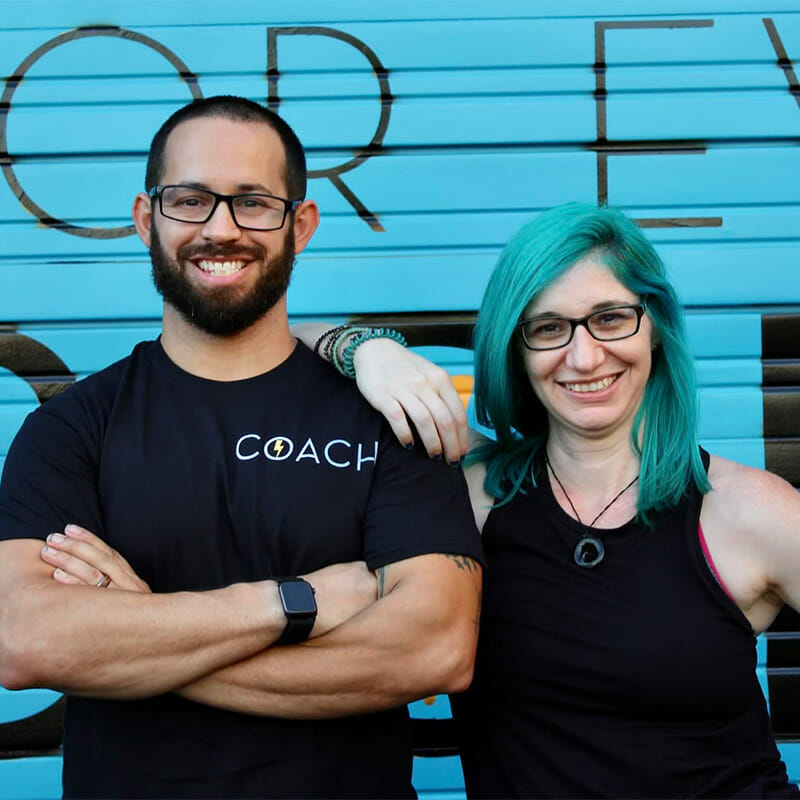 When I was in high school, I was voted most likely to replace the PE teacher… When I found out about that award, I remember laughing thinking that would never happen. However, when I started working out at high voltage almost 10 years ago, it rekindled the spark of teaching I had when I was younger. It took a year to get the opportunity to coach, but once I did, I was hooked. Watching people achieve goals they never thought they would be able to achieve is beyond rewarding to see. Still I lived my life in an able-bodied bubble and approached all of my coaching and training the same way.

It wasn’t until I met my now wife in 2019 that I was able to understand a perspective to training that wasn’t my own. She had been in a car accident that had left her with an ongoing disability. I watched as she would push herself and her body in ways I couldn’t even imagine, just to do the simplest fitness movements. As she worked through her rehab, one of her biggest complaints about the fitness industry was the widespread lack of inclusion for anyone who wasn’t able-bodied. How she never felt comfortable in a fitness space to let her body be as it is as she works her way through her own fitness journey. During 2020 I got my fair share of experience on how often she was told, “no” for simple accommodations, I started viewing the fitness community through a broader view.

While I can’t say we fully had a vision planned when we received the opportunity to purchase High Voltage, I remember discussing what our vision could be, and I knew the desire was for an inclusive fitness space. A fitness space where no person would be uncomfortable about a disability or the most novice fitness ability. Thus we have made this a cornerstone of our approach to running High Voltage; to always treat all members with the same respect that we have so tirelessly sought out. We want to make sure that every member knows that their effort is valued and worthy.

I’ve spent most of my life involved in athletics and have a deep love and respect for the incredible feats the human body can accomplish. I’m proud to lead High Voltage – a fitness community where I can join with members in pushing myself to achieve my goals – big or small.

I was always intimidated by CrossFit and CrossFit gyms until my partner convinced me to try one out. I was instantly hooked! CrossFit has allowed me to push my body and mind to the limit as I accomplish goals that I never knew I wanted to surpass. The best part of coaching for me is the opportunity to help members overcome their own insecurities and fears in a supportive environment. The High Voltage community always keeps me motivated to work on my goals.

I began my fitness career over two decades ago coaching High School wrestling. I then fell in love with Olympic Lifting. That love has taken me all over the country, where I have worked with beginner and World Qualifying athletes alike. After guest coaching at the world-famous Olympic Training Center, I relocated to Los Angeles and became fascinated with the intersection of fitness and corrective/rehabilitative exercise. After 25 years in the industry I am still, and will forever be, a student of fitness.

I have been a dedicated athlete for over thirty years and bring a lifetime of fitness and sports education to High Voltage. Drawing on years of experience, including playing collegiate football at The University of Georgia (Go Bulldogs!!!), I create my own fitness programs designed to challenge not only myself, but those he coaches, utilizing tools such as exercise variation, rep and load changes, or even variations in timing of reps. Coach Dukes is constantly working on finding ways to push himself harder to achieve his next goal.

As your coach, my goal is to pass on my education and excitement for fitness, while giving just enough encouragement to keep you working hard at being your best self. Whether I am leading a group class or am working with you individually, I tailor a plan that meets your needs to help you along your fitness journey – all while having fun doing it! I truly love what I do and experience genuine joy when I have the privilege of helping someone set and reach their fitness goals.

I found CrossFit when I developed a genetic hip injury, and I was hooked! It allowed me to work around my own fitness limitations while simultaneously pushing myself and my body in ways that I had thought were no longer an option for me. I learned that I could tailor each workout to suit my own individual needs, which quickly branched out into helping others tailor their own workouts to their own body’s needs.

The connection to Self and Body motivates my practice. In 2017, I discovered AcroYoga and was immediately intrigued by the emphasis on trust, communication, and relationship in direct alignment with my values. Acro has an innate ability to bring people together in the best ways, and I’m excited to share this with you. My greatest desire and intention is to make the skills learned in Acro transferrable to your everyday life.

I discovered AcroYoga in 2018 and have taken every opportunity to learn new skills and absorb knowledge from many of LA’s most experienced practitioners. As a certified personal trainer, I see Acro’s emphasis on balance and mobility as a clear complement to weight training. The true magic of Acro, however, is how it connects people and makes us better communicators by challenging us to solve puzzles collaboratively. I am excited to bring you along on this journey.

I began practicing yoga in 2007 while trying to find a way to cope with the physical and emotional demands of being a first-year middle school teacher. The focus on the breath brought calmness while the physical movements were reminiscent of my background in dance. I was hooked. In 2017, I traveled to Memphis and completed my 200-hour Yoga Teacher Training at Midtown Yoga. As a former dancer, I look to connect fluid movement with breath while maintaining a sense of zest and playfulness throughout the practice. I am a huge fan of restorative yoga and you can often find me with my legs against the wall.

I started doing cardio training back in 2013, but never really focused on anything past running, dancing and bootcamp style workouts. It wasn’t until 2017 I started weight training when I took my first class at High Voltage. After my first class I was absolutely in love with it. I really enjoyed the challenge and encouragement to lift weights and find my upper limits. High Voltage fostered the approach to compete with my past self over others and this really worked for me. My workouts became my therapy and have overwhelmingly helped with my anxiety as well as helping me become much stronger.

As the coaches over the years have always encouraged me to reach my potential I found as I became more confident in my skills I wanted to do the same. This community has always been so welcoming and encouraging along my fitness journey, when the opportunity came along to learn to coach I couldn’t pass it up. The High Voltage community has allowed me to prosper and find friendship, motivation and support.

As long as I can remember, I have always been involved in athletics. This passion started as a child and carried all the way through High School where I took part in Football, Wrestling and Track and Field. I attended the University of Maryland where I continued with Track and Field while studying Physical Education. For the last 17 years I have worked in this field allowing me the opportunity to work with all ages ranging from Kindergarten through High School. I have continued my own passion for weight training for the last 10 years and became affiliated with Crossfit about 10 years ago. My biggest passion is watching members and students improve their fitness levels and reach goals they never thought were possible. Helping each person understand that fitness is a life-long journey that we all should value.

I have been a trainer and in the fitness world for 40 years now. I was in school studying exercise physiology, when I got a job offer to go on the road with John Travolta, I ended up training most of the cast for the movie Perfect. I was with John for about a year, and decided to go out on my own and have done so ever since, I have obtained many certificates over the years, including an ISSA, NSCA and have followed Paul Check philosophies for a few years as well.

As an athlete, I had a brief career as a professional kick boxer, I had several amateur boxing matches, was also involved in many point karate tournaments, I received my black belt in 1998 in tae kwon do. Other athletic achievements include: nationally ranked triathlete, and a competitive body builders, winning titles as Mr. Golden valley, Mr Simi Valley, runner up in Mr Santa Barbara and as a teen Mr. Los Angeles.

I was the head strength and conditioning coach for Burroughs high School football team, I started and ran the kids boxing program at Gios boxing gym and also opened my own boxing gym in Hollywood called Shadow Boxing for a couple of years.

I’ve been involved in CrossFit for about five years, have competed in the open every year, at my age now… CrossFit for me is about quality movement and mobility. I’m happy to be a part of the High Voltage team